Why has there been no ‘Palestinian spring’? One word: Oslo 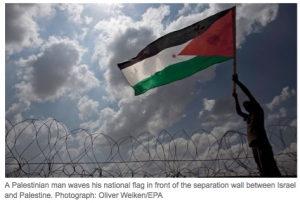 Ever since the uprisings in Tunisia and Egypt began a regional earthquake 18 months ago, commentators have wondered about the absence of a “Palestinian spring”. Attempting to explain this is useful, since it also helps to shed light on key problems with the now-comatose peace process.

To some extent, the question “Why no Palestinian spring?” can be answered with one word: Oslo. The Oslo accords, signed in 1993, established a paradigm where the Palestinian struggle for return and decolonisation was turned into a facade of sovereignty, piecemeal concessions and occupation management.

That, in turn, has shaped the behaviour and direction of key political actors in the occupied territories. The Palestinian Authority (PA), for example, marked the shift from a revolutionary focus to that of “interim” autonomy – which in due course became an institutionalised entity maintained for its own sake. Not only unrepresentative of most Palestinians worldwide, the PA leadership is disconnected even from those over whom it governs; VIP passes and diplomatic letter-exchanges are a stark contrast with the needs of prisoners’ families or expelled farmers.

Another consequence of Oslo has been the “professionalisation” of NGOs, and the huge role these organisations have had in encouraging certain types of Palestinian agency while marginalising or delegitimising others. As was pointed out well over a decade ago, “the NGOs’ lack of a mass base and focus on development and governance issues make them incapable of organising at the mass level”. Their professionalisation has created a marketplace that competes for funding (influenced by donors’ priorities) and has meant “the exclusion of a wider public that participates in determining priorities and national agendas”.

The PA and NGOs (both international and local) have contributed to the emergence of a “broad swathe of public opinion and material interests linked to maintaining the status quo, either fearful of what change may bring or simply unbelieving in the possibility of positive change”. These include merchants, those dependent on the PA for their salaries and those who have permits to work for the settlements and/or inside Israel. This large group constitutes “a solid constituency for not altering the status quo”.

There are other problems, too. Palestinians are confronted by physical obstacles to unified resistance and strategising, in the form of Israel’s colonies, checkpoints, road networks and the wall. There is also the bureaucratic regime of “permits” and separation, driving a wedge between Gaza and the West Bank, East Jerusalem and the West Bank, etc.

The physical fragmentation goes wider, of course, with Palestinians facing different realities – and experiencing a variety of legal regimes – in places as diverse as the Negev, Silwan, the Jordan Valley and Lebanese refugee camps. These create divergent sets of immediate priorities, which make it hard to create a campaign beyond the local.

An additional factor in the West Bank is the PA’s intolerant approach to dissent and public protest. The rulers in Ramallah are not only an obstacle to a “Palestinian spring” – for some, they are the target. Hamas in Gaza, too, has not been immune to the dangers of treating power as an end in itself.

In Amnesty International’s most recent global human rights report, both the PA and Hamas are criticised for mistreating detainees and restricting freedom of expression. Low tolerance for dissent in the media or in public demonstrations has been one example of the human rights violations that the Palestinian Centre for Human Rights says are “motivated by the ongoing state of political division, apparently as mutual reactions by each side towards the other one”.

Add to this the lack of a political programme representing Palestinian national aspirations, as well as the leadership vacuum brought about by the Fatah-Hamas conflict, and it’s no wonder that mobilisation is a tough challenge.

But that’s not to say it isn’t happening. Palestinians are mobilised but their mobilisation is decentralised and disparate – the energy is there but not in a way that may be immediately apparent. Multiple strands of activism are at play, some of which are aimed at directly, or indirectly, challenging the obstacles to resisting Israeli colonialism.

Until now, mass Palestinian action in the occupied territories is inhibited by a number of factors. But that’s not say things are standing still – and as we know from both Palestinian history and more recent events in the region, things can change in an instant.

First published in The Guardian UK.