Cracks in the Wall: Beyond Apartheid in Palestine/Israel (May 2018)

After decades of occupation and creeping annexation, Israel has created an apartheid, one state reality in historic Palestine. Peace efforts have failed because of one, inconvenient truth: the Israeli maximum on offer does not meet the Palestinian minimum, or the standards of international law.

But while the situation on the ground is bleak, Ben White argues that there are widening cracks in Israel’s traditional pillars of support. Opposition to Israeli policies and even critiques of Zionism are growing in Jewish communities, as well as amongst Western progressives. The election of Donald Trump has served as a catalyst for these processes, including the transformation of Israel from a partisan issue into one that divides the US establishment. Meanwhile, the Palestinian-led boycott campaign is gathering momentum, prompting a desperate backlash by Israel and its allies.

With sharp analysis, Ben White says now is the time to plot a course that avoids the mistakes of the past – a way forward beyond apartheid in Palestine. The solution is not partition and ethnic separation, but equality and self-determination – for all. 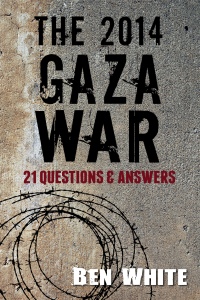 Is Gaza still occupied? How and why did Israel launch ‘Operation Protective Edge’? Did Israeli forces commit war crimes? Does Hamas use human shields – and what about the rockets? Answers to these questions – and more.

With a foreword by University of Exeter-based Israeli historian Ilan Pappe, this is an indispensable resource for understanding the events of ‘Operation Protective Edge’, the Gaza context more broadly, and the ongoing Israeli military occupation.

This eBook is currently available for purchase via Amazon stores. You don’t need a Kindle to read it however – if you download the free Kindle app, you can read my book on your smartphone, tablet, or computer – no Kindle device required.

With a foreword by Member of Knesset Haneen Zoabi, ‘Palestinians in Israel’ considers a key issue ignored by the official ‘peace process’ and many mainstream commentators: that of Israel’s Palestinian citizens.

What Israeli politicians call ‘the demographic problem’, Ben White identifies as ‘the democratic problem’ which goes to the heart of the conflict.

Hailed as “significant and timely” by Ahdaf Soueif, ‘Palestinians in Israel’ was praised by Israeli professor Ilan Pappe as an “accessible and forthright” book that “debunks convincingly and forcefully the myth of Israel being ‘the only democracy’ in the Middle East.”

You can buy ‘Palestinians in Israel’ direct from Pluto Press. It is also available on Amazon UK and Amazon US and as a Kindle eBook (UK and USA). 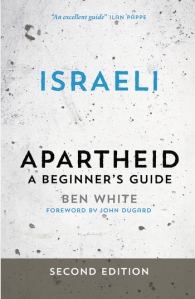 Israeli Apartheid: A Beginner’s Guide distills the work of academics and experts into a highly readable introduction. This is the book to read if you want to understand the root of the conflict and how apartheid applies to the situation in Palestine.

Endorsed by Desmond Tutu, Ilan Pappe, Ali Abunimah and others, the book was originally published in 2009 and an updated second edition was launched in 2014.

“If you want to learn about Palestine”, says Karma Nabulsi, “start here.”

You can buy ‘Israeli Apartheid: A Beginner’s Guide’ direct from Pluto Press. It is also available on Amazon UK and Amazon US, via the University of Chicago Press, and as a Kindle eBook (UK and USA).