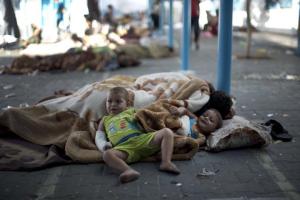 Gaza burns while the international community sits quietly, doing nothing about it. Israel has bombarded the territory for two weeks, killing more than 700 Palestinians and wounding well over 3,000. As I write this, I am aware that the death toll will only increase.

A massacre appals, disgusts, leaves one short of breath. It is a time for mourning, protest, but also education. Without an understanding of what is taking place in Palestine, we cannot put an end to this horror.

This is not a cycle of violence, or a tribal tussle. It is not a mutual embrace of revenge, or a childish tit-for-tat playground fight. It is none of those or other clichés used so readily and unthinkingly by politicians and journalists. This is settler colonialism and its consequences.

There is a line that connects the destruction of homes and displaced in Gaza today, back to the ruined villages and columns of refugees in 1948. The Palestinians call it Nakba — the catastrophe brought upon them by the Zionist movement that sought to establish a Jewish majority state in a land where there was none.

Look at Gaza, its bleeding, defiant population. Where are these Palestinians from? For many, they are from villages and land a matter of a few miles away; refugees still, because they are not Jewish. Old men and women in the camps of Gaza were forced from their homes at the point of a bayonet by the same armed forces that now use drones to achieve the same result.

Today, the Gaza strip is one part of an apartheid system stretching from the Jordan River to the Mediterranean Sea, a de facto one state controlled by Israel, within which Jews and Palestinians are granted or denied different sets of rights and privileges.

Why apartheid? Not because it is an exact replica of the political regime that existed in South Africa, no. But because the definition of apartheid, as found in United Nations conventions and the International Criminal Court’s Rome Statute among others, is not exclusive: it is about a system of separation, systematic discrimination, and human rights abuses that occur in the context of, and in order to maintain, that system.

Inside the so-called ‘Green Line’, the territory held by Israel before 1967, Palestinians with Israeli citizenship face institutionalised racial discrimination. These are the Palestinians who were not ethnically cleansed in 1948, but since that time, they’ve experienced martial law (which officially ended only in 1966), and decades of exclusion and political repression.

By the mid-1970s, the average Palestinian community in Israel had lost around 65-75 per cent of its land. Since 1948, more than 700 communities have been built for Jews and only a handful for Palestinian citizens (all of them shanty towns in the Negev for forcibly displaced Bedouin Palestinians).

In the Negev today, Bedouin Palestinians face the prospect of mass evictions, as the Israeli government seeks to ensure a Jewish majority — the openly stated intention of Prime Minister Benjamin Netanyahu — in the region, the same calculus used in other areas of the country like the Galilee.

Palestinian husbands and wives are separated by Israeli law, if one holds Israeli citizenship and one holds Gaza or West Bank ID. In around 70 per cent of Israeli communities, so-called ‘admission’ or ‘selection’ committees exclude potential residents on the grounds of ‘social suitability’. Many of them have been built on the lands of ethnically cleansed Palestinian villages.

This is a snapshot of life inside Israel’s ‘democracy’, where, to take another example, Israeli security forces have arrested hundreds of Palestinian citizens in recent weeks, as protests have taken place up and down the country against Israeli military attacks in the West Bank and Gaza strip.

In the West Bank and East Jerusalem, occupied by Israel since 1967, colonies illegal under international law have been established on expropriated land, and have continued to grow as part of a regime of segregation and control. Around these settlements live Palestinians whose homes are demolished for not having the ‘right permit’, even as they live under a legal system designed to fail them.

The demolished home is a constant: from 1948 through to today; rubble and strewn possessions the calling card of an army whose name is that of ‘defence’, but whose modus operandi is the routine targeting of occupied, stateless civilians.

In March 2012, the United Nations Committee on the Elimination of Racial Discrimination (CERD) described Israel’s violations in unprecedented terms.

It highlighted “segregation between Jewish and non-Jewish communities,” as well as a regime of “de facto segregation” in the West Bank — severe enough, in fact, to prompt a reminder to Israel of the prohibition of “apartheid.”

Thus ‘apartheid’ and ‘colonialism’ are not just slogans or rhetoric (as Israel’s spokespersons like to pretend) but real systems and structures that many get a glimpse of through an all-pervasive power asymmetry. The characteristically disproportionate death tolls are one example, but by no means the most instructive one.

A better illustration is that of prisoners, and the comparison between Gilad Shalit and the thousands of Palestinians languishing in Israeli jails. Every day and night, Palestinians are taken by Israeli occupation forces in the West Bank, processed through military courts, and kept behind bars for however long the Israeli authorities deem necessary. Torture is commonplace. Charges can be secret, and children are also imprisoned. Families are separated from their loved ones for months or years at a time, often simply on the grounds of ‘throwing stones’.

Zoom out, from the colonisation of the West Bank and home demolitions in East Jerusalem, the slaughter in Gaza and the detention of Palestinian activists in Haifa, and see the bigger picture: of a ‘Jewish state’ that was established through the ethnic cleansing of Palestinians, and maintained through their continued exclusion from their homeland; a Jewish majority established through violence, and a regime of privilege protected with the same deadly tools.

There is an alternative, one where Palestinian rights are respected rather than denied, where Palestinians and Jews live in a decolonised, genuine democracy, rather than an ethnocratic fortress-state. To get there will require considerable pressure, and the tools at the average citizen’s disposal are boycott and divestment campaigns, as called for by Palestinians.

We must urge our governments to apply sanctions and an arms embargo, while urging companies and institutions to end their ties with colonialism and human rights violations. There is no ‘cycle’ to be ended, but an apartheid system to be defeated.

Published first in The Hindu.