Does Abbas’s ‘genocide’ speech really signal a change of policy? 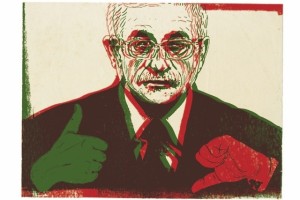 Palestinian president Mahmoud Abbas’s speech at the UN on September 26, became known for his claim that Israel perpetrated a “genocidal crime” in its attack on Gaza over the summer.

But the distance between rhetoric and reality in Mr Abbas’s speech was gaping. Security “coordination” between the Palestinian Authority and Israel prompted Palestinians in the West Bank over the summer to confront those PA forces trying to prevent them reaching occupation soldiers.

Indeed, at the end of 50 days of Israeli bombardment, and a month before Mr Abbas took to the UN podium, departing US peace process envoy Martin Indyk praised the Palestinian leader for “the way in which he had his security forces cooperate with Israeli security forces during the Gaza crisis and the way in which he prevented a third intifada from breaking out in the West Bank”.

These are the same Israeli security forces Mr Abbas says carried out “absolute war crimes” and “a new war of genocide” in Gaza.

While Mr Abbas was in New York denouncing Israel as a “colonial occupying power”, the security apparatus he oversees in the West Bank continued its routine cooperation with those very same Israeli military authorities. Since the end of August, PA security services have, like their Israeli counterparts, reportedly arrested dozens of Hamas activists in the West Bank.

There are other examples. Mr Abbas referred to the Nakba on five occasions – yet in 2012, he appeared on Israeli television and renounced his right of return to Safad.

He took time to praise the “qualitative and quantitative broadening of activities of the international grassroots boycott campaign”, but PA support for the Boycott Divestment Sanctions (BDS) campaign has been patchy at best: earlier this year, in fact, activists at a protest in Ramallah were arrested by the PA.

There were two particularly striking issues of concern and inconsistency in Mr Abbas’s speech. The first is to do with accountability for war crimes and the International Criminal Court. While Mr Abbas told the UN that “war criminals” will not be allowed “to escape punishment”, to date, the Palestinian leader has repeatedly refused to take steps that would enable a prosecution of Israeli war crimes suspects in The Hague.

Mr Abbas has treated the ratification of the Rome Statute, and the possibility of bringing war crimes charges against Israeli officials in the International Criminal Court, as a bargaining chip in a US-led peace process that lies discredited, comatose – and most likely dead.

Many Palestinians, as well as international human rights groups like Amnesty, have argued that the victims of war crimes deserve accountability – that bringing those responsible to justice should not be beholden to a political process shaped by US and Israeli priorities and concerns.

Moreover, in the words of Palestinian parliamentarian Hasan Khreisha, the ICC track is one of a number of “golden opportunities” that the Palestinian leadership is “not using”. Mr Khreisha, speaking to the Palestinian news agency Ma’an earlier this month, added that “rights should not be traded for other rights, and we should not stick to one option at the expense of other options”.

The second major question mark from the speech concerns the peace process and negotiations. On the one hand, the very language and tone adopted by Mahmoud Abbas seemed designed to – or at the very least will result in – an Israeli government even less willing to conduct serious talks than it was already. More importantly, Mr Abbas declared it “impossible” to “return to the cycle of negotiations that failed to deal with the substance of the matter and the fundamental question”.

He said: “The idea that it is possible to simply return to the past patterns of work, which repeatedly failed, is naive at best and, in any case, is wrong, as it ignores the fact that it is no longer acceptable, nor possible, to repeat methods that have proven futile or to continue with approaches that have repeatedly failed and require comprehensive review and radical correction.”

He confirmed his intention to take a resolution to the Security Council that will set a timetable for the end of the Israeli occupation of the West Bank and Gaza Strip. However, Mr Abbas also said that this would be “linked to the immediate resumption of negotiations between Palestine and Israel to demarcate the borders, reach a detailed and comprehensive agreement and draft a peace treaty between them”. All of which sounds remarkably similar to the failed strategy he had just apparently rejected.

Mr Abbas then spoke in Ramallah on October 1 in a similarly inconsistent fashion, saying he will apply to join the ICC should the UN Security Council bid fail (due to lack of sufficient support or a US veto) – but still backing direct talks with Israel.

He also vaguely promised to “reconsider everything” if his UN strategy is thwarted, assumed to be a reference to security coordination – but added that “we will not allow the firing of even one bullet” (by Palestinians against Israeli occupation forces).

Much of the Palestinian leadership’s strategy for the past two decades has been based on the assumption that “good behaviour” will convince the US, as well as European nations, to back Palestinian independence and call time on Israeli occupation. This has proven to be a dismal failure, and it remains to be seen whether another plan based on the idea of “embarrassing” the White House into declining to use its veto will be successful.

Mr Abbas’s headline-generating accusation of genocide thus actually spoke more about his weakness than his strength. Despite the grandstanding, Mr Abbas’s decisions to date indicate that he still views the ICC and other tools available to the Palestinians as cards to be played or held back for the sake of a bankrupt peace process, rather than as elements of a more comprehensive strategy for liberation and decolonisation.

It is possible that Mr Abbas, aware of the criticism inside and outside of Fatah and the PA, and thinking of his age and likely legacy, will embrace a genuinely new tack. He may have truly run out of patience and realised the uselessness of depending on political shifts in Washington that may never come (or at least not for some time).

But if Mahmoud Abbas really is embarking on a definitive shift in strategy, then it will be evident from radical changes in direction when it comes to issues such as national reconciliation, so-called security cooperation with Israel, a revitalised and representative PLO, and a fresh look at various forms of resistance.

In other words, the proof will be policies on the ground: not speeches and familiar threats.

Published first in The National.