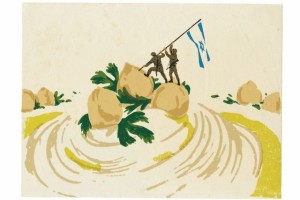 When Israel expelled hundreds of thousands of Palestinians from their villages and homes in 1948, many left with little more than the clothes on their back. Food was left on the stove. Crops were left unharvested. But the land emptied of its inhabitants was soon occupied by new residents.

From 1948 to 1953, almost all new Jewish settlements were established on refugees’ property. The myth of making the desert bloom is belied by the facts: in mid-1949, two-thirds of all land sowed with grain in Israel was Palestinian land. In 1951, “abandoned” land accounted for nearly 95 per cent of all Israel’s olive groves and almost 10,000 acres of vineyards.

During these early years, many Palestinian refugees attempted to return to their lands. By 1956, as many as 5,000 so-called “infiltrators” had been killed by Israeli armed forces, the vast majority of them looking to return home, recover possessions, or search for loved ones. Palestinian women and children who crossed the frontier to gather crops were murdered.

The Nakba in 1948 was the settler colonial conquest of land and the displacement of its owners, a dual act of erasure and appropriation. Citing “reasons of state”, Israel’s first premier David Ben-Gurion appointed a Negev Names Committee to remove Arabic names from the map. By 1951, the Jewish National Fund’s “Naming Committee” had “assigned 200 new names”.

But it did not stop with dynamite and new maps. The Zionist colonisation of Palestine has also included culture, notably cuisine. This is the context for the so-called “hummus wars”: it is not about petty claims and counterclaims, rather, the story is one of colonial, cultural appropriation and resistance to those attempts.

In the decades since the establishment of the State of Israel on the ruins and ethnically cleansed lands of Palestine, various elements of the indigenous cuisine have been targeted for appropriation: falafel, knafeh, sahlab and, of course, hummus.

Though these dishes are common to a number of communities across the Mediterranean and Middle East, Israel claims them as its own: falafel is the “national snack”, while hummus, according to Israeli food writer Janna Gur, is “a religion”.

In a 2002 article on recipes, the Israeli embassy in Washington acknowledged that “Israel lacks a long-standing culinary heritage”, adding that “only a few years ago, Israelis even doubted the existence of their own authentic cuisine”.

Such an admission is hard to find these days, as appropriation has become propaganda.

In 2011, Jerusalem-based chef Michael Katz visited Australia and told a local newspaper how the Israeli government had “decided, through culture, to start improving Israel’s image”.

“They started sending artists, singers, painters, filmmakers and then the idea came of sending chefs.”

In 2010, the Israeli government decided to distribute pamphlets at Tel Aviv airport, to equip Israelis who go abroad with, in the words of then-public diplomacy minister Yuli Edelstein, the “tools and tips to help them deal with the attacks on Israel in their conversations with people”. Included in the literature was the claim that “Israel developed the famous cherry tomato.”

Now, as the Jewish Telegraphic Agency put it earlier this year, “Israel has been on the culinary ascent of late, with dozens of food blogs, new high-end restaurants, cooking shows and celebrity chefs, and a fascination with everything foodie”.

It is not just food that is enlisted in Israel’s global PR initiatives. A few year ago, pro-Israel students at Brandeis University, in Massachusetts, held a “hookah night” with the help of campus-based “hasbara fellows”, professional Israel advocates who noted without any irony that “hookah is not specifically an Israeli cultural facet”.

In addition to smoking and snacks, the “cultural” evening also included belly dancers. Explaining the rationale for the event, a member of the Brandeis Zionist Alliance said they had found that “students are more receptive to Israel-related education when we use a cultural lens”.

Now we have “International Hummus Day”, launched by an Israeli, Ben Lang, who is explicit about the propaganda value of his project: “The idea was to connect people around hummus and get more people talking about it and hopefully get people to see the good things that are happening in Israel.”

“I just wanted to make sure that people saw that the initiative started in Israel.”

As everything from food to the keffiyeh is used to “rebrand” the state that colonised Palestine in the first place, Palestinians and their supporters have fought back.

When an Israeli choreographer included the dabke traditional dance in his company’s repertoire in 2013, a New York-based dabke troupe responded with a thoughtful critique that noted how, by “appropriating dabke, and labelling it Israeli”, the “power imbalance” is only furthered.

They added: “This makes us feel taken advantage of. Exploited. Commodified.”

In December 2014, after a campaign by Palestinian students and their allies, the student assembly at Wesleyan University in Connecticut agreed to remove Sabra hummus from campus dining facilities. The product symbolises Israeli appropriation and ongoing brutality; its parent company, the Strauss Group, donates to the Israeli military.

Accusations of cultural appropriation can produce some misleading responses. It’s not about who is “allowed” to eat what, or even about an objection to the natural cross-pollination that occurs in culture through language, cuisine and more.

That is not the point. It is about the claim of ownership in a context of historic and ongoing violent erasure and displacement.

It is about efforts to create an artificial history that justifies the establishment and continued existence of a settler colonial state.

Even a mainstream Israeli food writer like Gil Hovav has pointed to this reality. “Food is about memory and identity,” he told the Israeli media last year. “Claiming ownership over a food is a way to assert a nation’s narrative. Israeli Jews have made hummus their own.”

Cuisine is where efforts to both deny the existence of Palestine and appropriate its land and heritage meet. It is both an act of theft itself, and a way of justifying that theft.

Published first in The National.