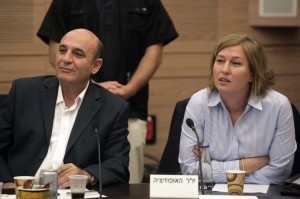 The first question is for the FCO. Livni, an opposition MK, came to London to speak at Fortune’s Most Powerful Women International Summit. Since this would have constituted a personal visit, rather than an official one, Livni arranged a meeting with Foreign Office (FCO) minister Tobias Ellwood. The FCO then duly granted the visit ‘special mission’ status, and thus gave Livni immunity from prosecution.

This latest episode further damages the credibility of the FCO. Already last year, there was “growing concern over the government’s issuing of special mission status, and the secrecy surrounding such moves.” There continues to be a troubling lack of transparency about the criteria used by the FCO in determining who is eligible for Special Mission immunity (and for what kind of visit).

The clumsy way in which Livni’s 2011 visit was handled illustrates the murky nature of the FCO approach. The Foreign Secretary’s written statement in 2013, defining a special mission as “a temporary mission, representing a state, which is sent by one state to another with the consent of the latter, in order to carry out official engagements on behalf of the sending state”, is insufficient.

This is because the FCO has not set any redlines, meaning that anyone, no matter how grave the war crimes they are suspected of having committed, can be granted immunity. In addition, the Crown Prosecution Service (CPS) must check on an individual basis with the FCO whenever the police contemplate making an arrest or a judicial arrest warrant is sought, a process that is both inefficient and, potentially compromising to confidentiality.

The second question is for the CPS. In the case of Mofaz, lawyers representing Palestinian victims told me that, in response to their approach, the CPS not only ignored the ordinary threshold necessary for arrest by the police, they also mis-applied the charging test when considering granting court access for a judicial arrest warrant. Lawyers working on the case were confident that a prima facie case against Mofaz had been presented, and that any queries could have been ironed out, following a police arrest.

The third question is for Israeli officials. Mofaz claimed his early return to Israel was for personal reasons, though Channel 2 thought otherwise. Others have maintained that the prospect of arrest is minimal, and the risk has been exaggerated. But the reality is thatIsraeli officials have never been confident enough to truly test the system: those liable to be arrested visit with special mission immunity, come on whistle-stop visits, or cut short their stays.

Mofaz apparently proceeded with his visit “in spite of advice” from Israeli government officials, claiming that were he not to participate in the conference, it would be “a 100 percent victory” for those seeking his arrest. Livni, meanwhile, declared that she is “not afraid”, and “ready to pay the price” for her actions – yet, she has not risked a visit to the UK without immunity since her arrest warrant was issued in 2009.

The day after Mofaz’s hasty departure, former Israeli naval commander Eliezer Marom penned an op-ed in Maariv on the threat of arrest still faced by Israeli officials (thanks to Ofer Neiman for translation). Marom, who was in charge during the Mavi Marmara assault and ‘Operation Cast Lead’, recounted how in 2013 he himself was questioned on arrival at Heathrow Airport.

Marom noted that the 2011 change in UK law has not ruled out the possibility of arrest, and describes how Israel’s Justice Ministry has a dedicated section “dealing with the defence of heads of the security establishment against lawsuits in various states across the world.”

This [was done] in order to allow former officers to continue to maintain their life routine and travel to foreign states. Army officers against whom an investigation is being conducted are required to coordinate their travels with the Ministry of Law, to avoid embarrassing incidents.

Marom concluded that despite various efforts to date, “incidents” of delays, interrogations, “and sometimes the risk of arrest”, will “continue to accompany” former and present Israeli officials. This tallies with Israeli assessments since 2011; responding to a cancelled trip by Doron Almog in 2012, an anonymous senior Israeli official admitted that the while the “new British law is better than the original one”, they “couldn’t fully guarantee [Almog] an arrest warrant would not be issued again”.

Contrast the visits of Livni and Mofaz with the arrest in London of Rwandan military general Karenzi Karake on behalf of Spanish authorities. A Human Rights Watch researcher expressed hopes that Karake’s arrest “could be a really important in terms of accountability” since “many senior officials in Rwanda have never been held to account.” When it comes to Israel, however, it is a different story.

According to Kristyan Benedict, Amnesty International UK’s Crisis Manager, it is “well known” that “UK authorities are content to undermine efforts to bring alleged Israeli war criminals to justice.” For Benedict, such “efforts to undermine international justice and entrench impunity are one of the main reasons this terrible conflict continues year after year.”

Benedict also suggested that the “next test for how seriously the UK values international justice” would be the government’s response to Palestinian efforts to seek justice “via the International Criminal Court.”

At the time of the change in law – a change entirely the result of Israel’s demands and the pressure of its UK-based lobby groups – the British government announced that the system would be “no longer open to abuse by people seeking warrants for grave crimes on the basis of scant evidence to make a political statement or to cause embarrassment.” No examples of this ‘abuse’ were given.

But the government also claimed that “those accused of these grave crimes will still be brought to justice if there is sufficient evidence against them”.” In 2013, the government emphasised that any application for special mission status “is considered carefully in view of…our policy of ending impunity for the most serious of international crimes.” These commitments ring hollow every time Britain helps an Israeli war crimes suspect evade justice.