Why Israel invented the concept of ‘settlement blocs’ 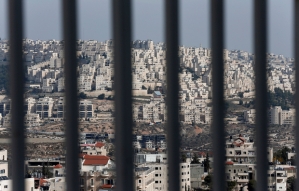 “We are here to stay.” These were the words of Israel’s Science and Space Technology Minister Ophir Akunis, as he attended the ceremonial opening of a new “heritage centre” in Ariel settlement on 17 January. “I want to send the EU ministers a message from here, the city of Ariel,” the minister said. “No step or decision that you take will remove us from our land.”

Ariel, established in 1978, is one of the largest Israeli settlements in the West Bank, with some 20,000 residents, as well as a university. The colony lies some 12 miles from the “Green Line”, and was “strategically built to wind its way along a mountain ridge surrounded by Palestinian towns and villages on all sides.” The Ariel “finger”, or bloc, includes a dozen or so separate, official settlements.

The location of Ariel, its size, significance, and impact on the Palestinian population, is a microcosm of Israel’s rejectionism of Palestinian statehood. It is also a good example of the role of so-called “settlement blocs” in both advancing the colonisation of the West Bank – and in obscuring and apologising for that very colonisation process.

A “settlement bloc” is an area of the West Bank where Israel has established a cluster of colonies in close proximity to one another, typically including at least one large town or city. These areas of concentrated settlement activity have been created by the Israeli state in order to effect a de facto annexation of land, colonise key portions of the West Bank, and fragment Palestinian territory.

How to define a “settlement bloc” is a matter of dispute. As The New York Times noted, “while Palestinian leaders have accepted the concept of [land] swaps, neither they nor the United States have ever agreed on a delineation of such blocks.”

Some identify six (Modi’in Ilit, Ma’aleh Adumim, Gush Etzion, Givat Ze’ev, Ariel, and Karnei Shomron), others seven, while the Applied Research Institute of Jerusalem has highlighted 14 sections, or blocs, of West Bank land that lie behind the Apartheid Wall.

The fact that the number and size of the “blocs” are unclear works to Israel’s advantage. As a Peace Now activist put it, while the term “settlement blocs” “is not defined by anyone”, they are “used in the [Israeli] discourse to say ‘well it’s alright; it’s only within the settlement blocs, these will certainly stay under Israeli sovereignty once there’s a two-state solution’.”

An interview with the spokesperson of Israel’s London embassy last year shows the use of the concept of “settlement blocs” in propaganda. Yiftah Curiel, speaking to sceptical student journalists in Cardiff, claimed (rather curiously) that as many as “90 or 95 percent of the settlements are within what’s called settlement blocs”.

They are close to the Israeli border, and those settlements will remain under Israel under future agreements, that’s already been discussed and agreed with the Palestinian side; in return for the actual land that these settlements take up, Palestinians will be given other land in other parts…. So, I think that the settlements are not the main obstacle perhaps to peace as some would like to view them.

Curiel could thus simultaneously dismiss concerns about the impact on the plausibility of a Palestinian state of Israel’s colonial occupation, as well as downplay the grave violation of international law that the settlements constitute (they are a war crime).

“Settlement blocs” are a concept with more significance than an embassy official’s struggle to defend the indefensible, however. Last November, for example, Israeli Prime Minister Benjamin Netanyahu reportedly told US Secretary of State John Kerry that “Israel will not allow Palestinian projects in Area C…unless it is given a green light to build in the settlement blocs”.

A few months earlier, in May 2015, Netanyahu told European Union foreign policy chief Federica Mogherini that he wanted to resume talks with the Palestinians in order “to reach understandings on the borders of settlement blocs that Israel would annex under any peace agreement.”

The concept of “settlement blocs” has thus become a key element in the game of smoke and mirrors that characterises the official peace process, another way in which Israel can obfuscate, blackmail, and kick the can down the road – all the while the colonies grow.

The blocs, and the Apartheid Wall, shape the borders of a Palestinian Bantustan. In March 2015, opposition leader and Labor chair Isaac Herzog stated that in a final agreement with the Palestinians under his leadership, Israel would keep the Gush Etzion, Ma’aleh Adumim and Ariel settlement blocs. He reaffirmed such a vision just this last week.

Yesh Atid party chair and “centrist” Yair Lapid has also recently affirmed the need for construction in the same three blocs. “Ma’aleh Adumim is a part of Israel,” Lapid said. “It will always be a part of Israel. There is no future agreement in which it is not a part of Israel.” Gideon Levy, mocking the way in which the so-called “settlement blocs” became a “consensus”, wrote the following in 2014:

Everyone is in agreement that it has been agreed upon; Gush Etzion from time immemorial. And it is not the only bloc that is agreed upon; so are the Jordan Valley and Ma’aleh Adumim, with its terrifying and hilly area, and Ariel goes without saying. Look at the map and you will realise how the supposed Palestinian state-to-be was put to death.

Too strong? Not really, when you consider that giving legitimacy to Israeli construction in the “blocs” means recognising: the annexation of East Jerusalem; settlement presence deep inside the West Bank “taking valuable natural resources (Ariel)”; Israeli control over the Jordan Valley; the splitting of the West Bank in two (Ma’aleh Adumim); and “the annexation of rich Palestinian agricultural and natural resources and heritage sites in the Bethlehem/Hebron area (Gush Etzion).”

The “blocs” have no special legal standing under Israeli law, and under international law they are as illegal as all of the settlements. Their size and borders are undefined, a fact Israel exploits to advance the colonisation of Palestinian land. The “blocs” do not even serve to slow growth in more isolated settlements, whose population has risen 15 percent since 2009.

The irony is that “settlement blocs” are cited by Israeli officials and apologists as evidence of the feasibility of a viable Palestinian state, when in fact, their establishment on the ground has been designed to preclude precisely that scenario. The creation of the concept must not be allowed to confuse: the “blocs”must be seen for what they are.