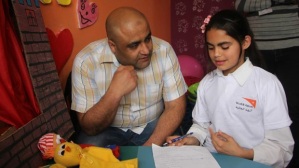 A senior Gaza-based employee of US-headquartered charity World Vision appeared in an Israeli court on Tuesday, charged with numerous counts of ‘supporting terrorism’.

According to the Israel Security Agency (ISA or Shin Bet), Mohammad al-Halabi infiltrated the charity on behalf of Hamas, redirecting tens of millions of dollars to Al-Qassam Brigades over many years.

But to the consternation of Halabi’s lawyer, family, and colleagues, as well as diplomats and human rights workers, the trial – which reconvenes in October – is being conducted entirely in secret.

Lea Tsemel, Halabi’s lawyer, told The New York Times that the proceedings against her client were taking place “amid unusual secrecy.” In Halabi’s trial, “all procedures and all evidence will be shielded from the public”, and some evidence will be kept from Tsemel herself.

In addition, Tsemel said Israeli authorities had prohibited her from “providing details of the abuse” Halabi alleges he was subjected to by ISA agents in detention.

Concerns about Halabi’s detention and indictment were expressed in forceful terms on the eve of the trial by Amnesty International, who, in their first full statement on the case, warned that “holding…court proceedings behind closed doors would render any convictions obtained unsound.”

Amnesty International also urged Israel to “immediately investigate the allegations that Mohammed al-Halabi was mistreated in custody and may have been forced into ‘confessing’ under duress”, without which “the trial risks being fundamentally flawed.”

Meanwhile, World Vision International (WVI)’s  president Kevin Jenkins told AFP that “a trial is legitimate if it is transparent”, adding: “We want the truth to come out.” Jenkins reiterated concerns that the financial details of the Israeli allegations were “very difficult to reconcile” with reality.

“We are not a naive organisation”, Jenkins said. “We have world-class systems to prevent the sort of things that are being alleged here. They are not foolproof, (but) they would generally have all sorts of red lights going off if anything close to what is being alleged should happen.”

When Halabi was charged, World Vision stated that “based on the information available”, it had “no reason to believe that the allegations are true.” Worryingly, though tellingly, an Israeli government spokespersontold a journalist that the precise amount of allegedly redirected funds was irrelevant.

Interestingly, the WVI chief also confirmed this week that “a former World Vision employee made an internal complaint of financial impropriety against Mr. Halabi before his detention, but a subsequent internal investigation found no evidence to substantiate the charge.”

This is almost certainly the same incident referred to in early August by Israeli journalist Amira Hass, who described how a World Vision employee “bore a grudge” against Halabi, who had fired him for “simultaneously receiving a salary from the Palestinian Authority.”

The complainant subsequently “sold his home in the Strip and moved to Egypt”; according to Hass, “a number of people in Gaza” see a connection. Halabi’s father also told reporters that the charges were based on “misinformation provided by a disgruntled World Vision employee.”

As soon as the indictment was announced, alarm bells were ringing. First, there was the gleeful PR bonanza immediately launched by the Netanyahu government, with the Foreign Ministryinstructing diplomats “to spread the news…among liberal and religious groups who support World Vision.”

Israeli minister Gilad Erdan, meanwhile, claimed that the charges against Halabi proved the existence of “extensive ideological and monetary ties between terrorist organisations and delegitimisation organisations that work against Israel.” This was not isolated rhetoric.

By August 22, a number of Israeli human rights NGOs released a joint statement in which they criticised the Israeli authorities for making “sweeping, far-reaching, and irresponsible allegations” against humanitarian organisations operating in the Gaza Strip.

On August 25, Haaretz revealed that “some of Israel’s key allies” had still not received “any intelligence or evidence” related to Halabi’s indictment. Israel’s conduct, “Western diplomats” said, suggested that the government’s priority was generating a “public diplomacy buzz.”

Then there were the allegations of torture during the 21-day period when Halabi was interrogated by ISA agents without a lawyer (a common experience for Palestinians). Such claims are consistent with the Shin Bet’s track-record in abusing detainees as part of the agency’s standard methods.

Amnesty International’s report for 2015-16 states that Shin Bet agents “tortured and otherwise ill-treated Palestinian detainees…particularly during arrest and interrogation.” A recent study in a peer-reviewed medical journal found “sexual ill-treatment” of Palestinian detainees to be “systemic.”

Speaking to me for a recent article, a senior American Civil Liberties Union official said Israeli civilian courts “act as national security courts” where Palestinians accused of ‘security offenses’ are concerned. “It is hard to challenge any due process violations” – including torture – he added.

Meanwhile, Save the Children has said that its “initial checks” have “uncovered no evidence” ofclaims made as part of the Shin Bet indictment against Halabi that one of its Gaza-based aid workers was recruited to Al-Qassam Brigades.

In its latest statement, the charity told me that while its assessment continues, “neither Save the Children nor the staff member in question has yet been notified or contacted by the authorities on the details of the allegations, and no charges have been made.”