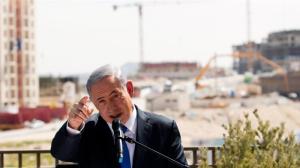 Last Friday, the Israeli government announced that it had suspended $6m in funding to the United Nations (UN), a move described as “an act of protest” against the recent Security Council resolution condemning illegal settlements.

But is this just the opening salvo in what could be an unprecedented offensive?

“Judging by how things are being handled in Israel at the moment, anything or any idea is possible, ” said Israeli political journalist and blogger Tal Schneider. “Seeing the government’s responses to Resolution 2334, I thought, ‘Are we going to leave the UN?’,” she told Al Jazeera.

But is it all just bluster and symbolism? The funding suspension is $6m from a total Israeli annual contribution of more than $40m. “The amount of money is so small,” Schneider commented, “that it’s more of a statement: neither the Israeli nor UN budget will feel it.”

However, after a change in US administration, there may well be more serious steps in the offing. Two days after the Security Council had adopted Resolution 2334, Israeli prime minister, Benjamin Netanyahu, said he had “instructed the Foreign Ministry to complete within a month a re-evaluation of all our contacts with the United Nations.”

This “re-evaluation”, the premier added, included “the Israeli funding of UN institutions and the presence of UN representatives in Israel.”

Deputy foreign minister, Tzipi Hotovely, meanwhile, has announced “plans to investigate the activities of the 15 UN facilities operating within Israel in order to determine whether to allow them to continue to receive funding and to maintain the use of their buildings in Israel.”

Another Israeli media report has claimed that the Netanyahu government is “considering stopping work visas to employees of these UN agencies and expelling UNRWA spokesman in Israel, Chris Gunness, who is accused by Israel of inciting against it”.

Khaled Elgindy, a fellow at the Brookings Institution’s Centre for Middle East Policy, told Al Jazeera that “if a UN official were actually expelled or declared persona non-grata, that could have very far-reaching implications.” He added: “I’d expect there to be an international response.”

The Security Council resolution came at the end of a year which had already seen a deterioration in conditions for UN employees and other NGO workers in Israel and the occupied Palestinian Territory, including an increase in access and movement restrictions in and out of the Gaza Strip via the Israeli-controlled Erez crossing.

Many Palestinians analysts and human rights groups viewed these prosecutions as politically motivated. This was bolstered by Borsh’s conviction last week in a plea bargain for offences much less serious than those initially, and very publicly, made by the authorities.

So which UN agencies might be the target of Israeli sanctions? A Western official, speaking to Al Jazeera on condition of anonymity, noted that bodies like the Office for the Coordination of Humanitarian Affairs (OCHA) or the Office of the United Nations High Commissioner for Human Rights (OHCHR) “are possibly more vulnerable because they don’t provide services that – under international law – the occupying power is obliged to provide the occupied population, such as schools and health.”

“If retaliation means Israel singling out those UN agencies it has always been uncomfortable with, then we know this is just a pretext,” Algindy told Al Jazeera.

“Going after UNRWA, for example, has nothing to do with the UN Security Council, but rather would be about stoking populist sentiment in Israel – something the Netanyahu government has been very good at doing.”

According to Amnesty International, Israel “must not inhibit the ability of humanitarian and development organisations to be able to carry out their vital work”.

“UN agencies, as well as NGOs, should be able to work free from arbitrary restrictions, harassment or intimidation,” said Jacob Burns, Israel-Palestine Campaigner at the global rights group.

He added: “It is particularly outrageous that Israel is threatening to undertake these punitive measures, which are likely to adversely impact upon the occupied civilian population, in retaliation for a UN Security Council resolution that simply re-affirmed the fact that Israeli settlements in the occupied Palestinian Territories violate international law.”

Yet, with Trump ensconced in the White House, will such warnings fall on deaf ears in Israel? Elgindy noted how “Congress is mulling all kinds of legislation to defund the UN”, reflecting “a strong anti-UN streak within the Republican Party”. Thus, he added, “there is a real convergence between Israeli populism and American populism, which if translated into policy could also have geostrategic implications.”

It was only last September that Netanyahu told the UN General Assembly that “the day is not far off when Israel will be able to rely on many, many countries to stand with us at the UN.” He continued: “The days when UN ambassadors reflexively condemn Israel, those days are coming to an end.”

But that was when the Israeli premier, like many others, assumed Hilary Clinton would be the next US president. “Are we going to see attempts to dismantle an institution that’s been there for decades?” Schneider wonders. “An axis of strong men – Trump, Putin and Netanyahu – perhaps think they can change the balance of power in the world. We are in a new, uncertain era.”

Addressing the possibility that anti-UN steps could include the expulsion of staff, the Western official told Al Jazeera that such measures would constitute “a path to isolation and pariah status.”