Why Israel does not want a sovereign Palestinian state 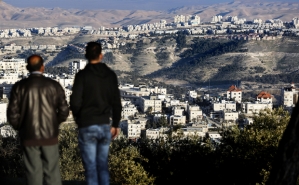 How many Israeli settlers – or settlement houses – until a two-state solution is impossible? That’s the question we should be asking our politicians, who frequently refer to a “closing window of opportunity” for a Palestinian state in light of Israeli “facts on the ground”.

Speaking in Parliament recently, UK Foreign Secretary Boris Johnson urged a halt to “the illegal settlements”; every time Israeli authorities “build new units”, he said, they “move us further from a two-state solution”, even if “they are not yet making it impossible to deliver the new map”.

So, the question remains: how many is too many? The current settler population is at least 620,000, including occupied East Jerusalem. But 35 years ago, a ‘mere’100,000 was seen as “so large a number that no Israeli government thereafter could agree to withdraw from the territory”.

Over the decades, the figure has constantly shifted to accommodate the pace of colonisation, with each successive doomsday milestone surpassed by the next: 100,000, 250,000, half a million – now some see 750,000 as the point at which “it will no longer be possible to divide the land”.

Last week, Israeli Prime Minister Benjamin Netanyahu told Chatham House that “sovereignty” may not be “applicable” in the Palestinian case. Emphasising that for Israel “the overriding concern is always security”, he suggested that other models of sovereignty should be studied.

During the same trip to London, Netanyahu refused to be drawn by the BBC’s Andrew Marr on whether he supported an independent Palestinian state, merely saying that the Palestinians should have “powers to govern themselves”.

This shouldn’t come as a surprise; in January, Netanyahu told his cabinet ministers that the most he is prepared to give the Palestinians is a “state minus”. In 2015, running for re-election, the Likud leader vowed that there would be no Palestinian state on his watch.

Netanyahu seeks the sympathy, and deflects the criticism, of Western audiences by linking his opposition to Palestinian sovereignty to Israel’s perceived ‘security’ concerns.

In fact, the “security” argument against Israeli withdrawal from the occupied Palestinian territory (oPt) and the establishment of a sovereign Palestinian state just does not stand up to scrutiny.

As SOAS professor Mushtaq Khan has explained, “Israel already possesses overwhelming military superiority not only against any conceivable threat from a future Palestinian state but also against threats from more populous and militarily advanced Arab neighbours.”

And if Israel did not have the military superiority to defend its pre-1967 borders, there would never be a time when sovereignty could be handed over, since “there is no such thing as a credible commitment not to attack in the future by showing a willingness to refrain from attacking today”.

If the security talk is a hoax, however – albeit one that far too many diplomats and analysts uncritically accept – then what explains Netanyahu’s opposition to Palestinian statehood?

We can only find an answer to this question by widening the scope of our enquiry, and accepting the unpleasant but undeniable fact that opposition to Palestinian sovereignty is a position that has been shared by every single Israeli government, and remains so today, across the political spectrum.

Avi Gabbay, current leader of Israel’s Labour party, may have expressed support for “two states for two peoples”, but he has made it clear – as, indeed, did his predecessor Isaac Herzog – that any such arrangement would not be on terms that are compatible with the rights of the Palestinian people.

Israeli journalist Yoaz Hendel pointed out this week that when Israeli representatives have spoken about a Palestinian state, “what they meant is an extended autonomy in which the Palestinians have political (and diplomatic) control, but Israel retains permanent security access”.

He continued: “In short, they mean something very similar to what we have today. The only difference between Right and Left in this context is the size of the discussed territory.”

Maintaining the status quo, annexation, or “separation” – these are the possible offers on the table with respect to this Israeli government or any that might plausibly follow it.

All are variations of managing, rather than solving, the so-called conflict – and none of them allow for the creation of a sovereign Palestinian state (and note that only 32 percent of Jewish Israelis back a two-state peace package – even with a ‘demilitarised’ Palestinian state).

“There are creative solutions to various problems”, US/Middle East Project’s Daniel Levy once told me, when we were discussing the issue of “land swaps”. “But creative solutions can’t paper over a gap that is so huge, because one side simply does not accept the legitimacy of the independent sovereign existence of the other.”

Western diplomats and commentators have failed to understand Israeli rejectionism, in part, by buying into the “demographic threat” rhetoric adopted by Israel’s pro-separation camp: Israel must relinquish (parts of) the West Bank so as to remain a “Jewish and democratic” state.

Yet, as Khan wrote in 2005, “critical aspects” of Israel’s “ethno-demographic challenge” – namely Palestinian citizens of Israel and Palestinian refugees – would not be solved by the creation of a Palestinian sovereign state in the oPt, and could arguably be worsened.

Seen from this perspective, Israel’s allegedly counter-productive policies in the oPt make more strategic sense. Israel “manages” the “problem” by creating (reversible) cantons of Palestinian autonomy; their lack of viability provokes Palestinian anger and resistance – which then becomes the justification for the “security first” approach of a permanently temporary “transition” phase.

The circularity has a kind of simple brilliance to it – but it is not necessarily sustainable. It can be disrupted by the international community calling Israel’s bluff, and by a Palestinian leadership that refuses to play by the rules of the game, and adopts a different paradigm.

Policy-makers must abandon a framing that presupposes, though rarely identifies, a specific “point of no return” for a two-state solution. It is time to accept the reality that Israel simply does not want a sovereign Palestinian state – and consider its serious implications.