The one-state solution is the only solution 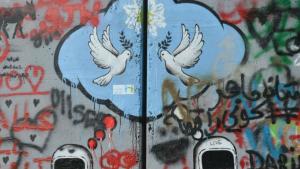 Palestinians are dehumanised in death, as they are in life.

Those gunned down by Israeli snipers – who, army officials assure us, carefully record every shot – are not husbands, sons, brothers, friends, colleagues, journalists, students or medics. They are ‘terrorists’. Pawns. Cannon fodder.

The dehumanisation of Palestinians is, of course, an intrinsic part of decades of colonialism, apartheid and occupation, but it still feels appalling anew, each time the Israeli army bravely dispatches those who defiantly demand their rights.

After the bloodshed comes the ‘PR campaign’, the hasbara. There is only one goal of such efforts, which Israeli officials and cheerleaders enthusiastically embrace after every atrocity. That goal is to dehumanise Palestinians to the extent that they are entirely expendable, stripped of the right to life.

It was ever thus. In his seminal essay, ‘Zionism from the Standpoint of Its Victims’, Edward Said noted how “all the constitutive energies of Zionism were premised on… the functional absence of ‘native people’ in Palestine”. He continued:

“Institutions were built deliberately shutting out the natives, laws were drafted when Israel came into being that made sure the natives would remain in their ‘nonplace’, Jews in theirs, and so on. It is no wonder that today the one issue that electrifies Israel as a society is the problem of the Palestinians, whose negation is the most consistent thread running through Zionism”.

I cite this passage in my new book, because Said’s diagnosis and clarity are as sorely needed in 2018 as they were when he first wrote those words some 40 years ago.

The growing realisation that what exists on the ground today in historic Palestine is an Israeli-controlled, de-facto, single – apartheid – state, is creating a space for conversations to take place that a quarter century of ‘peace process’ had silenced or relegated to the margins. Conversations about the origins of the so-called ‘conflict’.

For, I suggest, it is impossible to understand the trajectory that successive Israeli governments have taken over the last half century, including with respect to policies in the occupied Palestinian territory, “without placing such developments in the wider context of the Zionist movement’s efforts to create a ‘Jewish state’ in Palestine”.

While for its founding thinkers, and proponents today, “Zionism was about Jewish nationalism and self-determination”, for Palestinians “it was experienced from the very beginning as displacement, discrimination and dehumanisation”.

It has continued in the same vein ever since.

In the Naqab, Jordan Valley, southern Hebron hills, and neighbourhoods of Jerusalem, Palestinian homes are torn down right before their owners’ eyes. Palestinian refugees remain, in many cases, a few miles from the lands where they lived and from which they were expelled, denied return on the grounds that they are not Jewish – and thus pose a ‘demographic threat’.

Palestinian spouses are divided by discriminatory legislation, and Palestinian farmers are cut off from their lands. Kibbutzim built on the ruins of Palestinian villages ensure that potential residents are filtered for their ‘social suitability’. Much more refined than a ‘No Arabs allowed’ sign on the gates.

Masked Israeli soldiers raid Palestinian homes at night, seize children from their beds, convict them in military courts, then jail them as ‘security prisoners’.

Where do we go from here? A priority must be accountability for the atrocities being committed on a daily basis – from those directing and expanding Israel’s flagrantly illegal settlement enterprise, to the soldiers who shoot unarmed demonstrators.

But beyond accountability there must also be a political vision. For now, the ‘two-state solution’ remains the dominant paradigm for a long-term solution, even as Israel consolidates its de-facto, single state between the River and the Sea.

But for how much longer?

Other futures are coming into view, including those proposed by Israelis who seek a defiantly apartheid, single state.

But there is also an opportunity to suggest something different; a rupture with the settler colonial past and present, where the return of Palestinian refugees is liberatory rather than destructive, and where Jewish Israelis and Palestinians relate to each other as equal citizens in a shared home.

The idea of a single democratic state is not new, but it is now being explored, returned to, and revived.

Dismissed as ‘utopian’ by its opponents, a single democratic state in Palestine/Israel is, in fact, a realistic and vital alternative to both formal apartheid and doomed attempts to accommodate settler colonialism through ethnic partition.

First published by The New Arab.