How Israel is waging war on Palestinians in Area C 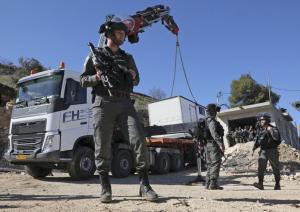 A new report in the Israeli publication Haaretz has shed fresh light on Israel’s intensifying demolition campaign in Palestinian communities, leading to a stark conclusion: Israel is conducting a war against the very existence of Palestinians in Area C, 60 percent of the occupied West Bank.

Meetings were held by the Knesset’s Foreign Affairs and Defence Committee in late July and mid-August, and the subject was “the Palestinian takeover of Area C”.

Under the Oslo Accords, the West Bank was divided into Areas A, B and C, with major Palestinian population centres in Areas A and B. Area C territory surrounds and fragments these enclaves, and includes smaller Palestinian communities and almost all Israeli settlements.

Language of a ‘takeover’

Taking the accords at face value, Area C was territory that would be “gradually transferred to Palestinian jurisdiction”. Israeli authorities and settler activist groups, however, have treated Area C as being under permanent direct Israeli control, on both strategic and ideological grounds.

This is where the language of a “takeover” comes in – a world view that sees Palestinian territory under Israeli military occupation as belonging to Israel forever by “right”. From this perspective, the Palestinian farmer, not the settler, is the “invader”.

The Knesset meetings held over the summer, attended by senior political and military figures, saw officials proudly testify to the committee concerning the efforts taken to target and destroy Palestinian agriculture and construction in Area C.

According to the head of the so-called Civil Administration, Israeli forces have uprooted 42,000 trees planted by Palestinians over the past 20 years, including 7,500 in 2019. That same year, Israeli forces confiscated 700 excavators and other equipment from Palestinians, a “very significant deterrence”.

Remember that the justification for these demolitions and confiscations is “illegal” construction. Then also recall that, according to official data, Israel approved just 21 of 1,485 Palestinian applications for construction permits in the West Bank from 2016-2018 – a 99 percent rejection rate.

‘They have enough territory’

The goal is clear: to remove Palestinians from large areas of the West Bank. Senior Israeli officials “drew up regional priorities for demolishing Palestinian structures,” Haaretz noted, which “at this stage” include “the area surrounding Jerusalem,” the South Hebron Hills and the Jordan Valley.

According to Knesset committee member and senior Likud MK Nir Barkat, Israel’s priority is settling two million Jewish settlers in the occupied West Bank and “thwarting… Palestinians’ attempt to change the situation”. He added: “They have enough territory in A and B.”

Israel is proceeding full throttle in defining the size of the Palestinian bantustan – or bantustans, since there is no territorial contiguity – at around 40 percent of the West Bank. Crucially, this is being achieved not just by expanding settlements, but also by removing Palestinians.

Palestinians were described in the Knesset committee meetings with strikingly dehumanising language: Palestinian homes, agriculture and the basic infrastructure of life were called a “virus,” “territorial terror” and a “cancer”.

Present during the proceedings was a staffer with Regavim, a settler group that campaigns to see Palestinian structures demolished. One state official at the meetings “said the coordination between various groups that report immediately on Palestinian construction has improved greatly”.

Regavim’s materials are full of racist dehumanisation, describing Palestinian communities as “spreading tentacles throughout Israel,” and warning that “the Jewish People is being robbed of the Land of Israel”.

The organisation, invited to London last year by UK Lawyers for Israel, has also been central to attacks on Palestinian NGOs, such as the Union of Agricultural Work Committees (UAWC), which plays a critical role in promoting Palestinian farmers and community resilience in Area C.

Regavim had its sights set on UAWC back in 2014, and in 2018 affirmed it was a priority target as “the main organisation involved in agricultural projects in Area C”.

The report on these Knesset meetings was published, coincidentally, a few days after a top UN human rights official slammed a spike in Israeli destruction of Palestinian property over recent months. In Israel’s war on Palestinian communities in Area C, there is no ceasefire for Covid-19.

In the statement released by Humanitarian Coordinator Jamie McGoldrick, UN data showed “the demolition or confiscation of 389 Palestinian-owned structures in the West Bank” during the period of March through August. As a monthly average, it constitutes the highest destruction rate in four years.

These demolitions, the UN added, left 442 Palestinians homeless. In August alone, more than 200 were displaced, “more than in any other single month since January 2017”.

Note that in addition to homes, Israeli forces have been targeting for destruction or confiscation “water, hygiene or sanitation assets, and structures used for agriculture,” including dozens of structures “given to Palestinians as humanitarian aid”.

The story on the ground is only going to get worse. A UN update published last month highlighted the pernicious role of Military Order 1797, which came into effect in July 2019 and “allows for the expedited removal of unlicensed structures deemed as ‘new,’ within 96 hours of the issuance of the ‘removal order'”.

Still seen by Israel as a “pilot,” this order has resulted in the demolition of at least 66 structures in the year since it was first deployed.

Meanwhile, 20 million shekels ($5.8m) has just been allocated by the Israeli government “to survey and map out unauthorised Palestinian construction” in Area C, a development reported by Haaretz as the “first time that funds have been specifically allocated for such a survey as part of the state budget”.

Everything mentioned in this piece is public information. The number of demolished Palestinian structures is meticulously counted and reported on by local and international NGOs and agencies. Israeli politicians and military officials are open about their intentions.

Yet, there is still no serious action from key international actors, such as the European Union or governments that profess support for international law and human rights. Indeed, the Knesset noted how “the number of internationally (mainly European) financed Palestinian projects [in Area C] shrank to 12 in 2019 from 75 in 2015”.

Israel has zero incentive not to pursue its goals in the West Bank and Area C in particular. With the (temporary) removal of formal annexation from the agenda, and the UAE-Israel normalisation deal, even the mere threat of serious international consequences has dissipated.

With attention diverted by the coronavirus pandemic and the regional “peace deals,” Israel is aggressively pursuing attacks on Palestinian communities intended to create an irreversible displacement, and to achieve the benefits of formal annexation in Area C – without any of the potential costs.